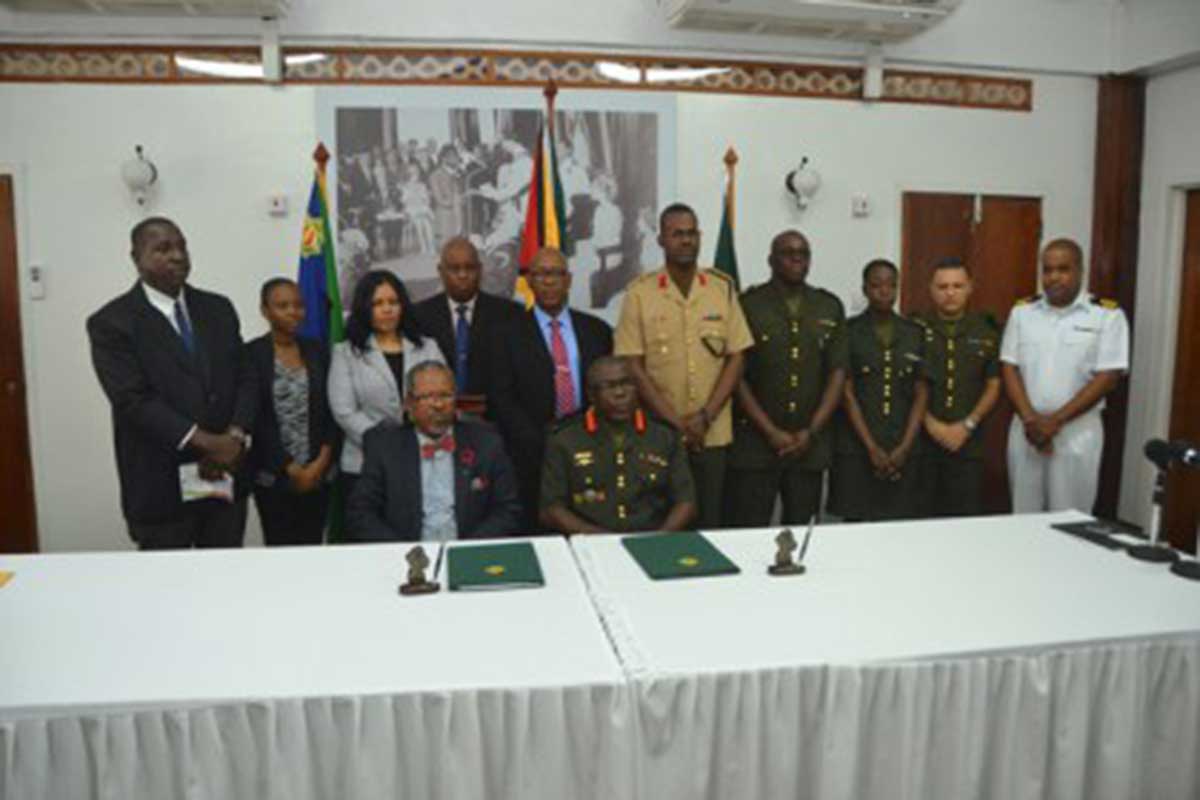 The Guyana Defence Force and the University of Guyana today signed a historic Memorandum of Understanding (MOU) for educational collaboration. The signing took place at a ceremony held in the television room of Base Camp Ayanganna. Chief of Staff Brigadier Patrick West explained that the MOU which is in keeping with international norms will result in Officer Cadets of the Standard Officers’ Course Number 50 and beyond receiving Associate Degrees in the field of Agriculture.

“I am particularly pleased today to sign this MOU for academic collaboration which will enhance the academic profile of our Standard Officers’ course number 50 future standard officers’ courses of the GDF at the same time it will develop the Agriculture Corp as a Research Centre with the University of Guyana”, West said.

According to the Brigadier, “The concept basically sees the implementation of a national security strategy that employs all instruments of national power in a more integrated way to meet the challenges faced by Guyana at this time. This would obviously require a higher degree of inter-agency cooperation to combine defence with diplomacy economic development with law enforcement and civil authority with the Defence Force.”

Meanwhile, Vice Chancellor of the University of Guyana Professor Ivelaw Griffith says the signing of the MOU is a good expression of what the leadership of the Guyana Defence Force thinks of its ranks.

“We have a critical role not only in enabling our nations individual mandates for us to educate and defend but in the context of those mandates, there are very many elements some of which mean educational collaboration is necessary not simply desired,” Vice Chancellor Griffith told representatives of UG and GDF at the ceremony.

Professor Griffith also encouraged future collaboration with the GDF, especially in the preparation of ranks of its Officer Corp for continued service after retiring their military career.

The Guyana Defence Force’s Agriculture Corp was established almost fifty years ago while the Colonel Ulric Pilgrim Officer Cadet School was established in 1981 and continues to be one of the Regions functioning military training schools. 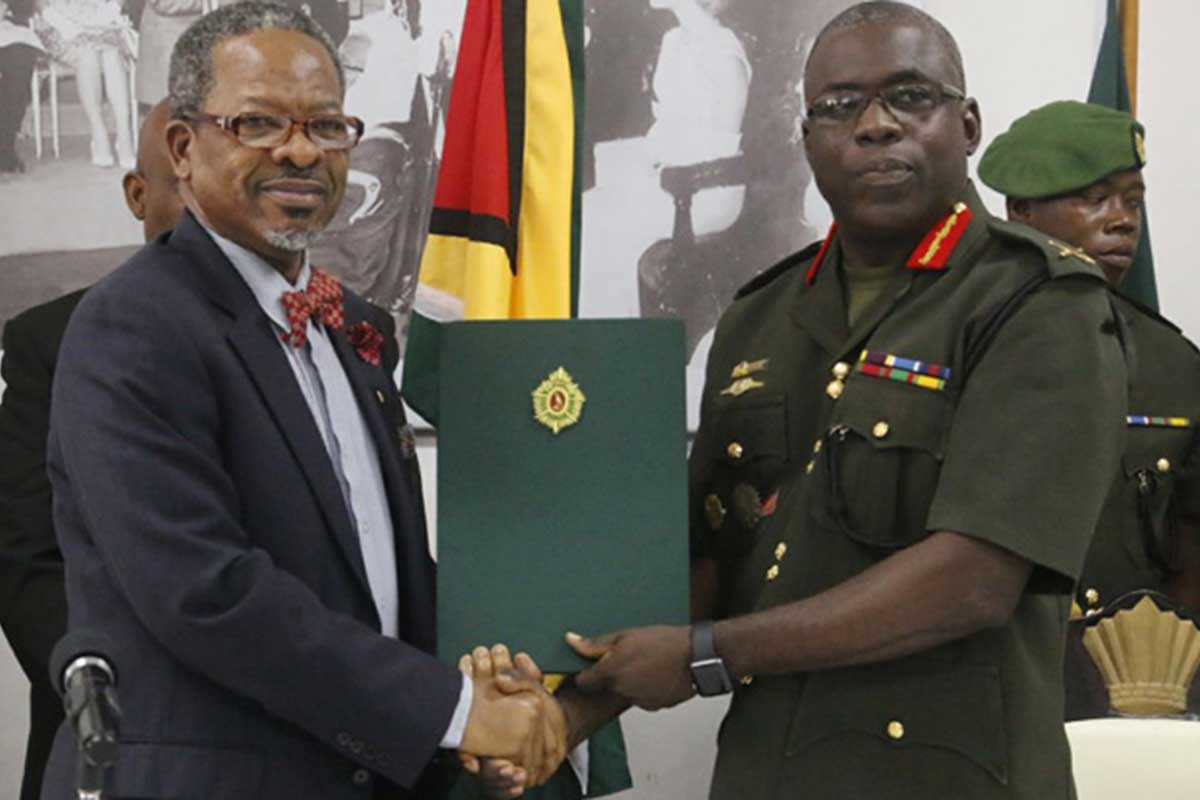 As part of enhancing the national security strategy, the Guyana Defence Force, (GDF) yesterday inked a new agreement with the University of Guyana, (UG) to further the academic programme offered to army officers and ranks. According to Chief of Staff, Brigadier Patrick West, the Standard Officers Courses are set to be improved through collaboration with the tertiary institution.

The courses, the GDF Chief explained, are integral to “Effective Transformation for Total National Defence, an implementation of a national security strategy that employs all instruments of national power to meet the challenges faced by Guyana at this time.” “This would require a much higher degree of interagency cooperation than obtains at present to combine the defence with diplomacy economic development with the law enforcement and the civil authority with the Defence Force.”

Giving a brief history on the projects, Brigadier West noted that the Officer Cadet Division at the Training Corps of the GDF evolved into the first Officer Cadet School in the English-speaking Caribbean. “The initiative was undertaken to ensure that a more rounded and educated officer is prepared to fulfill his role in promoting total National Defence. To date 49 Courses have been completed.” “We will see the officer not only being involved in a horizontal relationship between Defence Force, Militia and police but also vertically at the Central and Regional levels.”

Through this initiative, the Brigadier noted that the Officer Cadet Programme will be almost on par with other international programmes. The course is set to last for 24 months. Upon graduation, the students will not only receive their instruments of Commission, to command and lead in this force, but also an associate Degree from the University. “We maintain, today, that we are still the only successful officer Cadet Programme in the English-speaking Caribbean and we will continue to support the training of officers for Joint Services and the Caribbean.”

The arrangement between the GDF and the University is not strange to Militaries and Academic communities since we have been marrying the two worldwide. “I am heartened to see that Guyana is following. I envision that in the future this collaboration will be further expanded.” Meanwhile, UG’s Vice Chancellor, Professor Ivelaw Griffith noted that the University can play a role in preparing members of the disciplined forces prior to their retirement. He believes there are great opportunities for gainful employment and utilization of capabilities and skills of military men and women.

These men and women should be better positioned to take their skills and assets from the armed forces and leverage some additional skills so life after retirement is beneficial, not only for economic benefit but for gainful employment and utilization of their skills. “Within a year of transitioning and moving to retirement [the University] can help them to be better positioned for gainful economic employment,” he added. The University’s Vice Chancellor said that a report has been handed over to the government for action to be taken. The first batch of approximately 40 army officers will begin training next month. 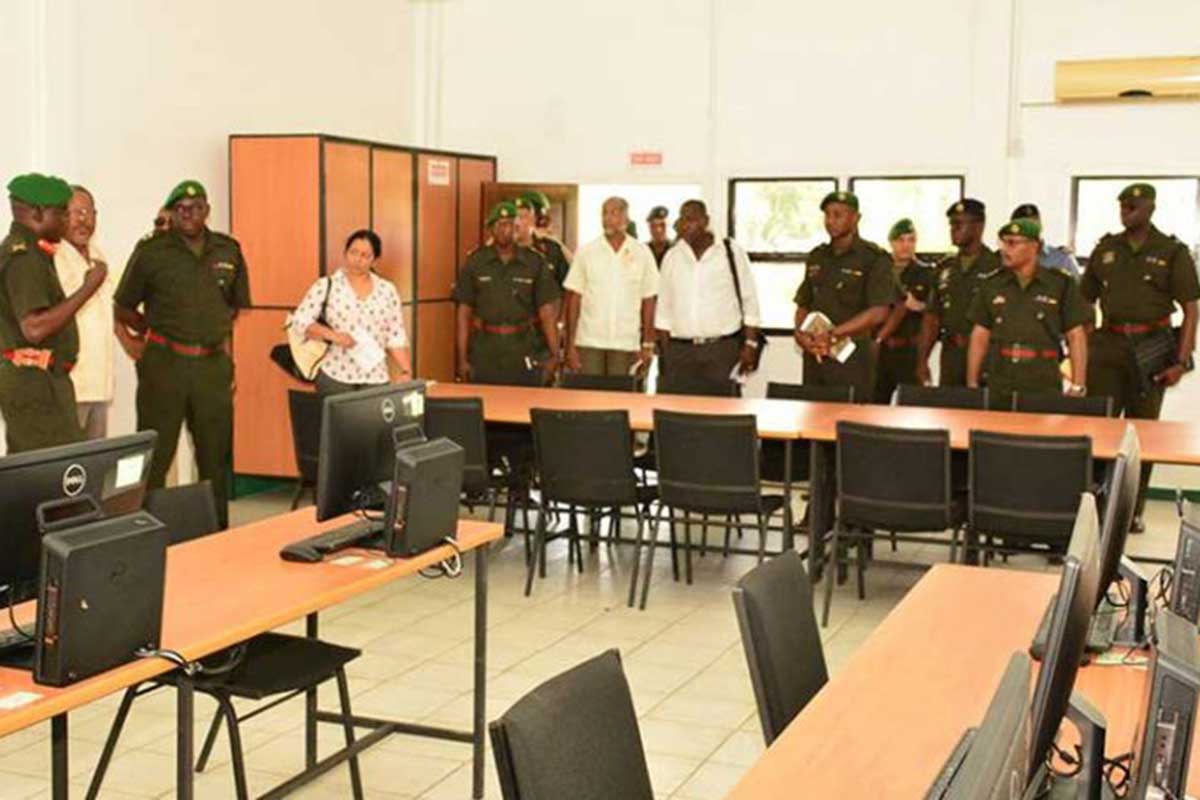 The Guyana Defence Force (GDF) is collaborating with the University of Guyana (UG) to strengthen its Officer Cadet programme by adding an Associate Degree in General Studies component to it.

In a release, the GDF said, “in a major shift for effective transformation for total national defence is embarking on an initiative to significantly upgrade its training of Officer Cadets, through the introduction of an Associate Degree in General Studies, as a compulsory element on their road to officer-ship.”

This initiative, the army said is set to commence with the next cohort of Cadets on Standard Officers Course Number 50. To this end, the GDF and the University of Guyana have held preliminary discussions regarding the move to enhance the training of the Officer Cadets.

Additionally, in a follow up move, Brigadier Patrick West invited UG Vice Chancellor Ivelaw Griffith and his team to visit the training facilities at the Colonel Ulric Pilgrim Officer Cadet School at Base Camp Stephenson. There, the visitors benefitted from a briefing regarding the use and administration of the facilities, which was followed by a tour.