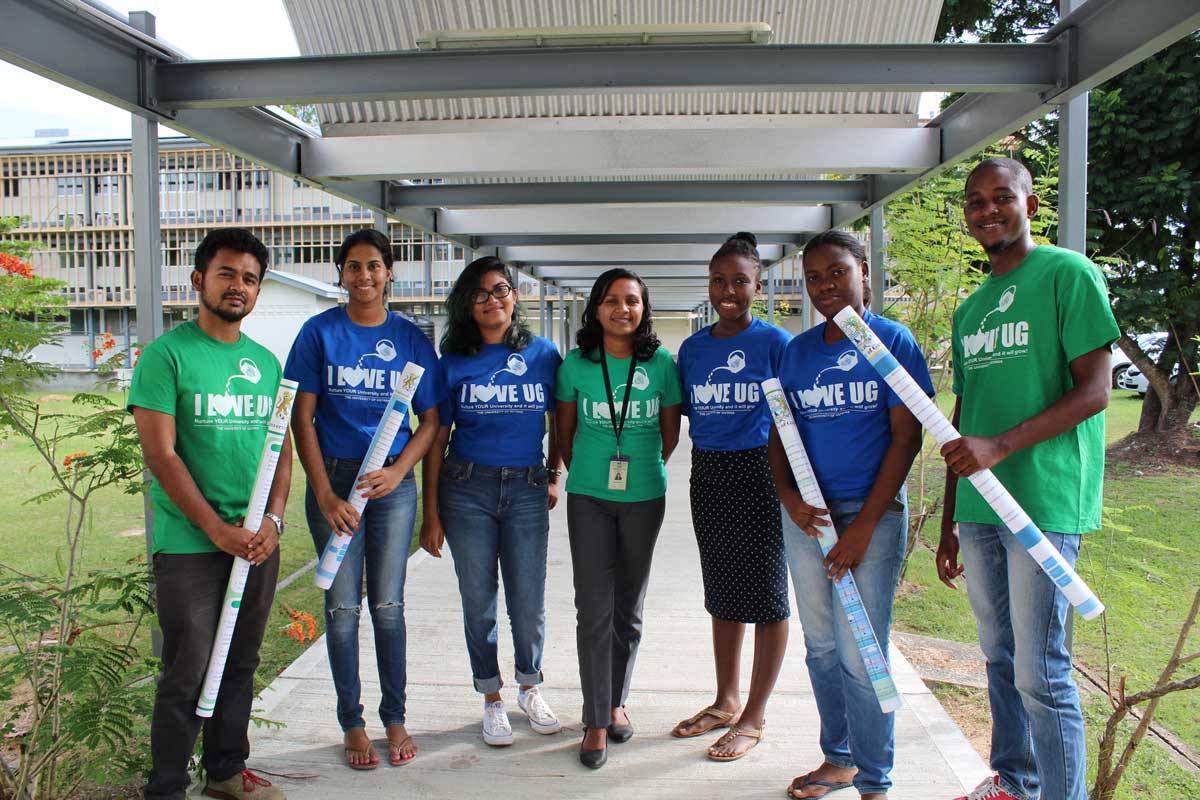 Seven Students from the Faculty of Natural Sciences, University of Guyana (UG) were selected to participate in the Florida International University (FIU) McNair Scholars Research Conference 2017, from Wednesday, October 19 to October 20, 2017. The conference is being held at the FIU’s Modesto A. Maidique Campus, the participants from a number of institutions will share their research and explore graduate studies possibilities.

The contingent consists of six undergraduates and one faculty member. Joenitta Arthur-Mc Kenzie of the Department of Biology will speak on her research assessing the prevalence of intestinal parasitic helminths in children of Silvercity, Linden, Guyana. Puja Jaichand of the same Department well present her work on the consumption patterns and the economic impact of wild-meat on the Essequibo Coast. From the Department of Chemistry, Lisa Dublin will present on the development of highly mesoporous activated carbon from coconut shells for water treatment, while Rajiv Indrajeet will present on the characterization of the physicochemical properties of various cassareep available on the local market for the purpose of preparing a grading standard for local cassareep. From the Department of Computer Sciences, Alicia Layne will be presenting on an integrated health information systems for improved diabetic outcomes in Guyana and Owen Grant will speak on his work focused on distributed object computing – complexity reduction and interoperability. The students will be accompanied by Ms Diana Seecharran. Assistant Dean of the Faculty.

The Faculty sees this as an opportunity to showcase the valuable scientific work its undergraduates conduct annually. More importantly we see this as an opportunity for our students to gain exposure, build international networks and explore their graduate study options in the US. Participation in this conference is now used to motivate students to an even higher level of performance in undergraduate research.

The Faculty of Natural Sciences is grateful for the opportunity to participate in this conference once again and for the support of the University of Guyana, Florida International University and other donors for their generous contributions to the venture.

This is the second time that the UG will be participating in this annual event. In 2015 the Faculty sent a team of five to the conference. Feedback from the students and staff as well as the conference organisers was extremely positive.  The students selected are among the best of the student researchers in each of the three departments in the Faculty with a research component in their Bachelor of Science programme. The selected students were then required to submit an abstract of their research for oral presentation or poster display to be evaluated by the conference committee. All submissions from the University of Guyana were accepted.

About the McNAIR Conference.

The McNair Scholars Research Conference is an annual activity under the FIU’s ‘Ronald E. McNair Post Baccalaureate Achievement Program’ funded by the US Congress. The programme was named after Ronald E. McNair, an American physicist and astronaut who was killed when the space ship ‘Challenger’ disintegrated soon after take-off in January 1986. Ronald McNair is known for challenging segregation laws in South Carolina at age 9 so as to access library books. By the time of his death at age 35, he had earned a PhD from the Massachusetts Institute of Technology (MIT), had been awarded three honorary doctorates and held the distinction of being the second African American and first Bahá'í to travel in space.

With a current enrollment of some 8,000 students, The University of Guyana (UG) has graduated more than 20,000 students who have gone on to successful careers locally, regionally and internationally. The University is also a major contributor to the national economy and to business and industry. Established in 1963 on a part-time basis with shared space at Queens College, UG moved to its own campus at Turkeyen in 1970 and expanded in 2000 with the addition of the Tain Campus. It now offers more than 60 Under-graduate and Post-graduate Programmes including the Natural Sciences, Engineering, Environmental Studies, Forestry, Urban Planning and Management, Tourism Studies, Education, Creative Arts, Economics, Law, Medicine, Optometry and Nursing. Several online programmes are available and The UG also offers extra-mural classes at four locations through its Institute of Distance and Continuing Education (IDCE). The UG also offers the opportunity for student engagement in debating, sports, and cultural, religious and professional activities.