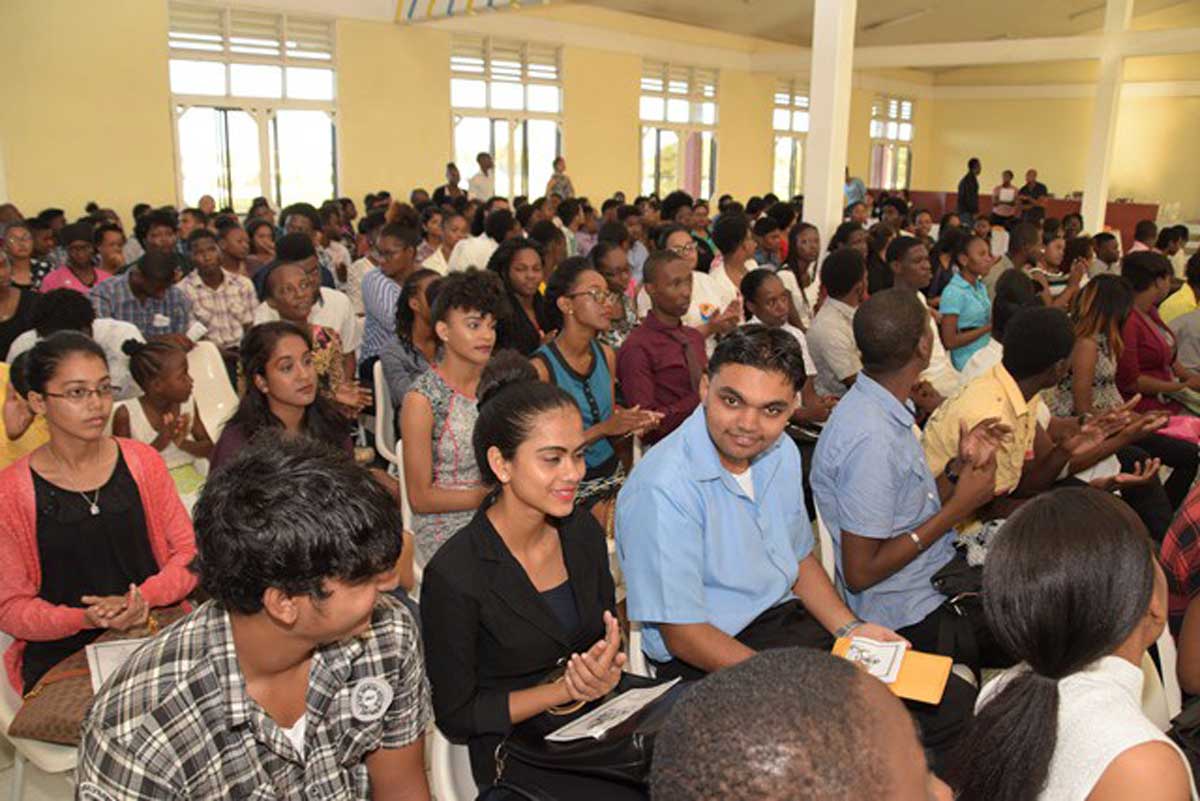 Georgetown, Guyana – (November 25, 2017) Permanent Secretary, Department of the Public Service, Ministry of the Presidency, Mr. Reginald Brotherson, this afternoon, told the estimated 409 recipients of 2017/2018 University of Guyana (UG) and Guyana School of Agriculture (GSA) scholarships that the Government of Guyana’s investment in their education is a demonstration of its commitment to national development and to transforming Guyana into an “education nation”.  Speaking at the orientation exercise, which was hosted in the Library of the Cyril Potter College of Education (CPCE), Turkeyen, the Permanent Secretary encouraged the students to see the scholarship as a partnership with the Government, for which their reasonable returns would be to contribute to the prosperity of the nation.

“The Government and people of Guyana; taxpayers, we have invested… a lot of monies and we look forward for the appropriate returns … This investment is a partnership … We want you all to understand the nature of that investment. We want you all to understand that the Department of the Public Service in the Ministry of the Presidency is mandated by policy to ensure that we address the student needs, but in addressing the student needs there is a partnership. It is not we and them, but us,” he said. The Permanent Secretary noted that scholarships incur a cost to the State but Government is committed to investing in education and training because it is convinced of the transformative power of education.

Delivering his feature address, Educationist, Mr. Vincent Alexander said that having been the recipient of several Government of Guyana scholarships, he is a testimony of what a scholarship can produce. He said that the ceremony has made him nostalgic and it brings to mind the purpose for which scholarships are granted, for personal development and for nation-building.

Meanwhile, scholarship awardee, Mr. Meshach Atkinson, who will be pursuing a Diploma in Communication Studies at the University of Guyana said,” I think this is a great opportunity for me and I plan to make the most of it”. Past recipients of the programme, Ms. Roshana White, who completed a Diploma in Animal Health and Veterinary Public Health at the GSA; Mr. Jenarine Hardat, who graduated with a Bachelor of Science Degree in Agriculture Science and Ms. Alphia Moore, who graduated with a Bachelor of Science in Education, both of the latter two from UG, all expressed gratitude to the Ministry for their scholarships.

“While my University of Guyana experiences [were] met with its fair share of challenges, the scholarship was able to relieve much of my financial burden as well as provide the continuation of employment in Early Childhood Development within the Public Sector. This was an excellent opportunity to pursue my passion, further build on my purpose and add value to the school system at the La Grange Nursery School,” Ms. Moore said.

Last year, the Ministry awarded about 310 scholarships, although only a small percentage of those recipients pursued studies at the GSA. The Ministry also offers grants to students pursuing studies at the Carnegie School of Home Economics and The Burrowes School of Art, among other institutions. 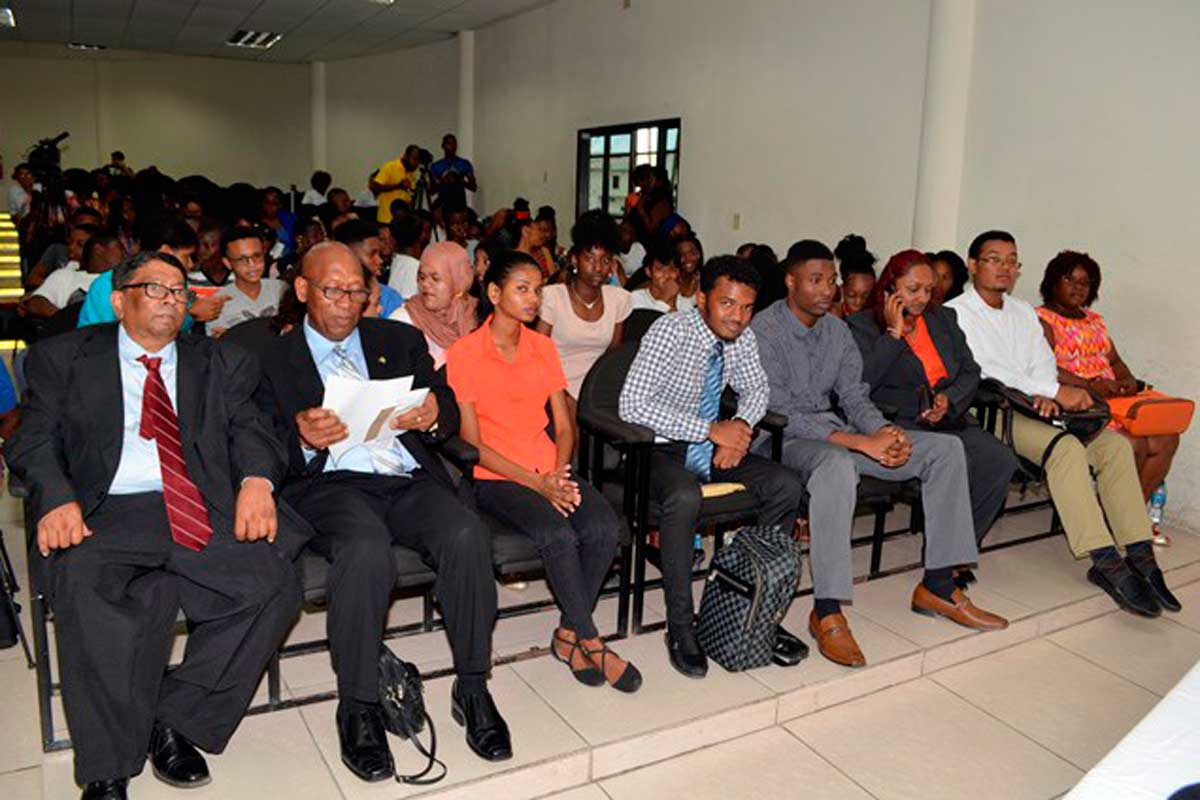 Five persons on Friday were awarded scholarships from US based Zara Group of Companies as it launched its first scholarship programme. The grant covers tuition fees for four years at the University of Guyana (UG), Turkeyen and Tain campus. The awardees are Jamal Joseph Austin who will major in Geological Engineering, Jaya Devi Deonarine in Optometry, Javin Harris in Computer Science, Hester Hernandez in Chemistry and Denise Mona Saul who read for a Bachelor’s Degree in Education.

The scholarship programme is a collaborative effort between Zara Group of Companies and Guyana Police Force (GPF). In brief remarks, at GPF Zara Computer Training Centre, Eve Leary, Senior Vice President, Zara Group of Companies Jay Sobhraj congratulated the awardees for making their families and country proud in attaining the scholarships. “We look forward to seeing you through the four years, provided that you maintain your academic standards,” Sobhraj noted.

Information Technology (IT) Consultant Nardeo Singh explained that the creation of the scholarship programme is the company’s way of allowing the young people to make a difference in Guyana. In addition to its ongoing Information Technology training programme, he noted that the scholarship is also in keeping with the agency’s commitment to its corporate social responsibilities. “We are in New York, we cannot do it, and we are too far from doing it. You (young people) have to invest in yourself and you have to invest in your country we (Zara group of companies) are here to just help you along the path,” Singh said.

It was highlighted that this scholarship programme between GPF and Zara Group of Companies is a five-year partnership that requires the students maintain a point average (GPA) of 3.0. U.G Deputy Vice Chancellor, Turkeyen Campus Michael Scott ,responsible for Academic Engagement, commended the founders for their contributions to the young people, noting that the opportunity provided to the awardees will benefit them greatly and they should consider themselves fortunate since they will assist in the country’s development.

“On behalf of our university which will have the benefit of having access to these young minds to be part of that institution because that is the contribution you are making, we are having yet another field to reap from so therefore this is another opportunity for us to be able to access excellent students to our institution,” Scott noted. Hester Hernandez who is from Lethem, Region Nine told the Department of Public Information (DPI) that he is fortunate to have been granted the scholarship because he had applied to several tertiary institutions in an effort to improve himself academically.

“I know I am meant to do well, as well to make the company proud … and I intend to use my education to assist my community because I was a teacher for two years so when I finish (the course) I will return to teach (St. Ignatius Secondary School),” Hernandez said. Denise Mona Saul is grateful for the opportunity to begin her studies, since the scholarship will remove the question of student loans while she continues to work.

Smith added that Electronic Data Preparation and Management (EDPM) received five distinctions, 15 Grade Ones, six Grade Twos and one Grade Three, while IT received seven Grade Twos and six Grade Threes. She noted that for the remaining of 2017, there will be continued emphasis on the training programme with a vision to surpass 2016 figures.

“We intend to train two additional adult programmes, one young foundation programme, one advance and one PC repair and maintenance programme which will give us an estimated 107 participants taking our total to 629 persons for 2017,” Smith explained. Acting Police Force Training Officer, Assistant Commander Maxine Graham encouraged the graduates to strive to build on the foundation received during their training, noting that technology is important and integral part of society. “I urge you (graduates) to value the importance of the use of computer and the use of technology because computer literature make you marketable and an asset to any organization,” Graham noted.

Over the past five years, Zara Group of Companies has trained over 10,388 young people since the launch of the IT training programmes. The company established some 35 years ago, by a Guyanese family was mainly involved in real estate business and managing apartment buildings. Today, the company has collaborated with several organisations including the Central Islamic Organization of Guyana (CIOG) and the Guyana Police Force, in all three counties.

Zara Group of Companies, the cyber security body that provides technological support to the Guyana Police Force (GPF) is offering four scholarships to the University of Guyana, in collaboration with the Force. The scholarships are for full-time prospective University of Guyana students for either the Turkeyen or Tain branch. Kaieteur News was informed that two of the scholarships will be available to the public and the remaining two will be offered to the immediate family members of ranks of the Guyana Police Force. The scholarship will be for four years and completely covers the tuition fee. Students are required to maintain a high grade point (GPA) of 3.0.

If two or more candidates are eligible, the short listed candidates will be selected by a random draw. To be eligible for the scholarship, students must have a minimum of eight subjects at the Caribbean Secondary Education Certificate (CSEC), proof of acceptance letter from the university, demonstrate the need for financial assistance, and a letter showing that the candidate has completed at least 100 hours of community service. Zara Group of Companies has been contributing to the technological sector within Guyana for several years. They have been supporting the police force in terms of cyber crime fighting. The non- Governmental organization has opened computer centres across Guyana where police ranks and civilians benefit from free training. In 2013, the Zara group established a computer centre at the Richard Faikall Training College at Suddie which caters for the need of ranks in “G” division and residents.

With the use of Information and Communication Technology (ICT), the organization aims to bridge the gap of a community/police partnership. Kaieteur News understands that the computer classes, which were being done in collaboration with the police, have made some communities a more relaxed place, where it is easy for civilians and police ranks to communicate. The Zara group was established about 30 years ago by a Guyanese family residing in the US, and is involved in real estate business. The organization has since collaborated with several institutes including the Central Islamic Organization and the GPF as a means of giving back to the country. 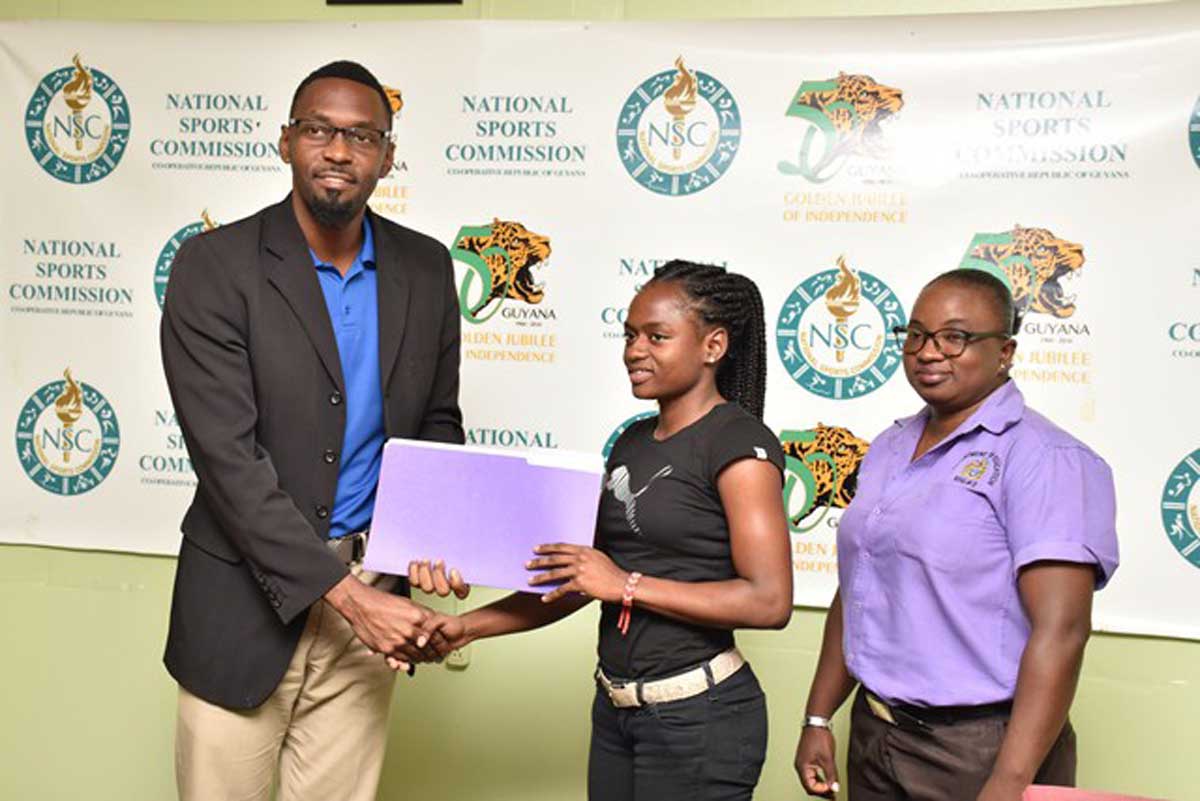 The National Sports Commission (NSC) Friday signed a Memorandum of Understanding (MoU) agreement with two athletes, providing them full scholarships to Monroe College. This was disclosed during the signing held at NSC’s boardroom.

In brief remarks, Director of Sport attached to Ministry of Education Department of Culture, Youth and Sport Christopher Jones explained that the agency’s initiative to provide scholarships to the athletes were due to their performance at the Caribbean Free Trade Association(CARIFTA) Games, earlier this year.

“The National Sports Commission (NSC) would make available to the two athletes namely Onassha Rogers and Claudrice McKoy, the same amount that would have been used to facilitate them at the University of Guyana (UG),” Jones noted.

Jones highlighted that the athletes who are slated to depart on August 18, will receive their first payment Friday August 04. He noted that though the two athletes have accepted the college’s offer, they will still receive the payment per the agreement.

“As stipulated in the agreement should there be some reason they (athletes) are unable to complete the scholarship offered by Monroe College, the payments will cease however should they decide to pursue at UG, then the payment will continue,” the Director of Sport added.

Onassha Rogers, one of the athletes slated to depart for the US, expressed her gratitude towards the NSC and the government for their support in her abilities and furthering her education. She said that she hopes to make Guyana proud for giving her the opportunity.

“First of all, I would like to say thank you to the National Sports Commission (NSC), the Director of Sport Christopher Jones for this contribution made. I am very excited and happy for this opportunity to further my studies and I promise to do my best,” Rogers said.

The Director of Sport noted that the agreement signed is part of the government’s mandate of honouring their commitment towards providing platforms for the athletes’ development.