The judge learnt the Garifuna language

Last Tuesday evening, I went to the University of Guyana Vice Chancellor’s Conversation (on the Law and Society). It was the first event hosted by the VC to which I lent my presence. There were other events that I wished to attend, but the invitation to those specified a dress code, which I would not give anyone the right to dictate to me about.

There were as some may say the usual masturbation of thoughts and ideals (self-indulgence), however there was also a healthy dose of realism. This I know because the personality whose life and works were selected to build the theme of the discussion was someone whom many in the audience knew. Hence, we heard phrases akin to He never crowed like a fowl-cock about his virtues though reveled in the moments when recognition came his way. The time spent there certainly was worth it and I can say to the VC if he has any doubts I left that environment more knowledgeable.

I would not focus on the presentations and presenters of Tuesday evening in a big way but on the concepts, that were promoted. My intention is simply to continue the conversation. As a layman who depends on the services of members of the legal profession, from time to time I know the frustration of having a matter dragged through the court and was pleased to hear of the progress being made in the wider Caribbean as regards eradicating the backlog in the courts. It was fun to hear lawyers admit that many among them were in part responsible for the creation of these backlogs, while making suggestions to reduce them including remedies to the other sources of the backlog phenomenon.

Justice Stephenson of the Eastern Caribbean Supreme Court alluded to the need for Attorneys to establish Corporate Practices, showing how such coming together can be effective in reducing the said backlogs. In advancing/promoting the said idea, as a consumer of legal services, I see the move from a single practitioner to a Law Firm as healthy for the client not only with regards the rate at which cases can be executed but in bringing security of continuity. Should I hire a Lawyer who operates as a sole practitioner, if for some reason that Lawyer cannot be at court, my matter invariably would be put down or the opposing Lawyer may take advantage of his absence and have the matter tried in his absence. On the other hand, if my Lawyer was a member/associate/partner from a firm, there would most probably be a fully prepared representative, standing in. In actuality today should your lawyer leave the jurisdiction you need to pay another to continue your matter.

The lead participant in the discourse (conversation) certainly impressed. However, the most impressionable note he sounded was not in his erudite presentation on the life and works of Attorney at Law, Chancellor and Professor JOF Haynes but on his own practice as a Judge. This Guyanese working in Belize took time off to learn the Garifuna Language. I must take my hat off to you every time we’ll meet in the future Justice Abel. That act of yours convinced me that you took time off to really understand the situation of those whom you Judge.

Two years ago, I was at the Whim Magistrate’s Court, which was presided over by Magistrate Charlyn Artiga. That day at the court in Whim taught me so much about Guyanese and the languages we speak.

Magistrate Artiga at times tried to speak (in Creolese) so that those under her judgement understood what was happening, at other times the Police Officers present did the translations. I remembered the Magistrate asking a person (I think he was the complainant) to decide if she (the Magistrate) should try his case at Whim or he wished that it be tried at the High Court. The man clearly said High Court after she repeated her question three times. It was not until she announced something to the effect that he should get a Lawyer, and make preparations to defend the matter at the Berbice High court in New Amsterdam, that realisation struck. The obviously disturbed man began a tirade about how much a lawyer would cost and how much time he’ll waste if he has to travel to a New Amsterdam court.

Obviously being a responsible and concerned official, Magistrate Artiga, to her credit and that of some Police Officers present were able to accommodate the man’s true desire in having the matter resolved at Whim.

In that same court, when some of the cases were called, the parties actually declared that they had reached resolution outside of court. In other words, via a mediatory process, which happened primarily because of the family or communal influences which are rather still powerful in that part of the country as against the urban settings of the city or say most parts of Region # 4, where I am from. A demonstration that mediation can have a role to play in removing some of the backlogs that occupy the Judicial System, as was suggested by many on Tuesday.

In closing, I can imagine Justice Abel bantering in Garifuna as he gathered information on which to make a decision within the laws of Belize while even considering some of the norms and practices which may not be enshrined in the official Legal System of the land but are grounded in the value system of the people that inhabit Belize.

Please continue the conversation and thanks Mr VC for the invite. 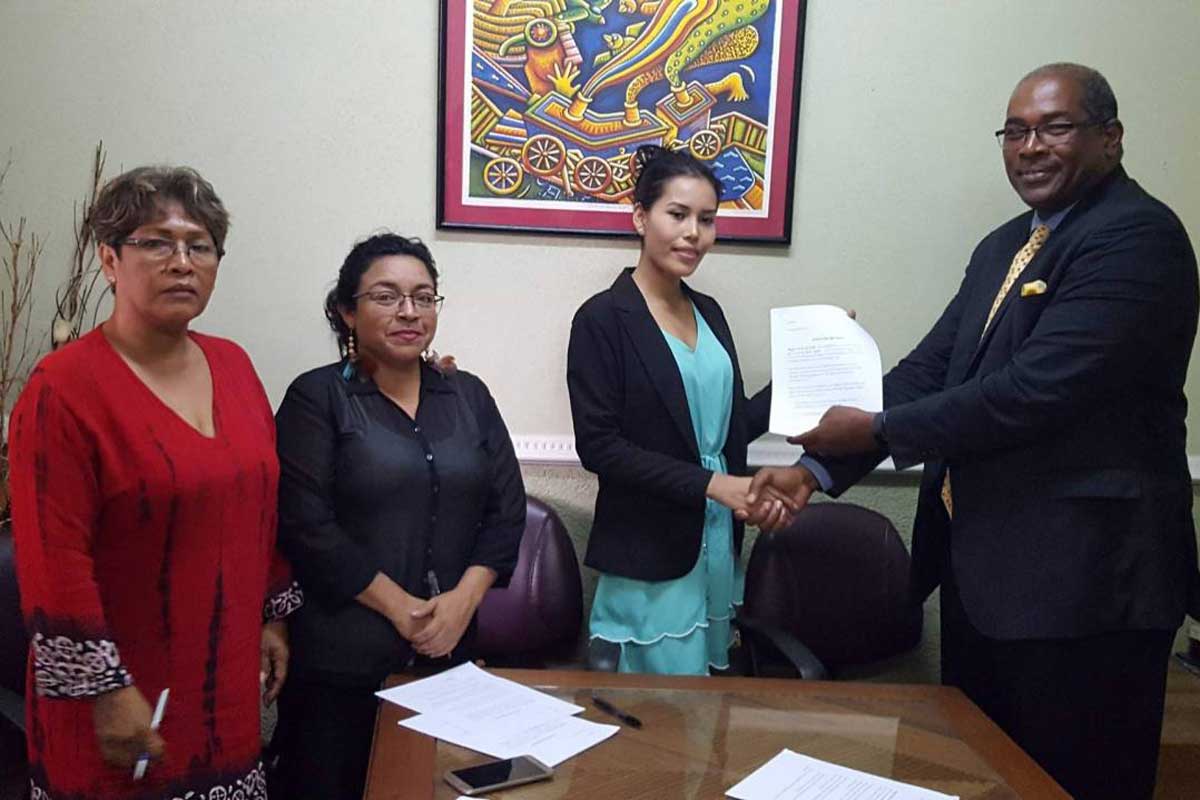 After earning her place in this year’s University of Guyana law programme, Guyana Times reporter Paula Gomes was on Friday awarded the first ever Clarence A F Hughes scholarship for Indigenous students pursuing an LLB.

This is as the Amerindian People’s Association (APA) seeks to secure sponsorship for Indigenous students to ensure that high flyers are given the opportunity to chase after advanced levels of education.

Shortly after gaining entry to the UG LLB programme, Gomes, who hails from Paramakatoi Village in Region Eight (Potaro-Siparuni), reached out to the APA for financial aid as she reads for her LLB.

As a result of her request, the representative body of Indigenous peoples extended her application to the Hughes, Fields & Stoby Law Firm who responded favourable.

The 20-year-old is now the first ever recipient of this scholarship which provides full funding for the education of promising Indigenous youths who will be embarking on the journey of becoming an Attorney.

Speaking at the presentation ceremony which was hosted at the office of the law firm, Attorney Nigel Hughes, congratulated the young reporter, alluding to the longstanding relationship his firm shares with the APA.

The Attorney went on to say that, “I am happy to say that the APA contacted us last week and they identified what I believe is the best candidate to pursue an LLB course at the University of Guyana and as a result of our collaboration, Hughes, Fields & Stoby have agreed to fund the entire law programme for Ms Gomes.”

He pointed out that Gomes’ outstanding results at the Caribbean Examination Council examination was a positive factor leading to the award of the scholarship. “She will perform extraordinarily well and we are honoured and privileged to have been afforded this opportunity to provide this scholarship for Miss Gomes.”

Meanwhile, in her address at the ceremony, awardee Paula Gomes extended gratitude to both the law firm and the APA while highlighting the significance of this contribution, especially as it relates to the development of the first peoples of Guyana.

On that note, Gomes stated, “while I applaud the generosity of Mr Hughes and his law firm, I believe that there should be more awards of this kind for I know of many Indigenous persons who are not able to realise and unleash their full potentials simply because of financial constraints.”

With that being said, the aspiring lawyer assured that the investment will have a significant ripple effect on her community and the first peoples at large. She even offered words of advice to others looking to follow in her footsteps by saying, “Being an Indigenous person and being someone who truly knows the struggles of Indigenous peoples, I would like them (other Indigenous students) to know that the opportunities are endless if only you reach out far enough.”

The scholarship awarded to Gomes marks the first award to be made in honour of the late Attorney, Clarence A F Hughes and sets the way for others to benefit, with talks of it becoming an annual initiative. 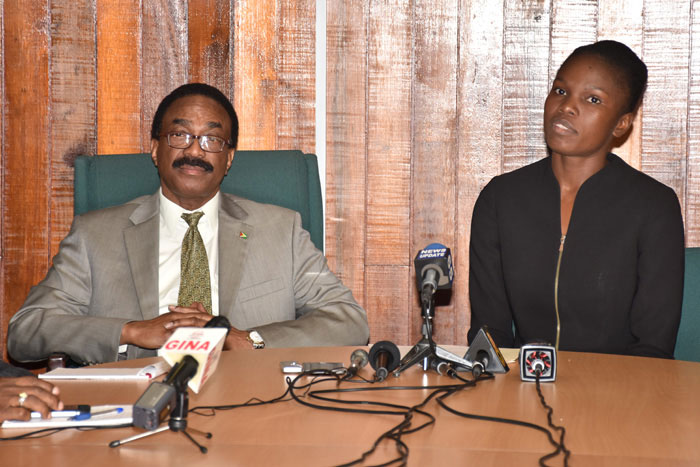