The University of Guyana Investiture Ceremony 2017

Professor Ivelaw Lloyd Griffith was officially installed as the tenth Vice-Chancellor of University of Guyana.

The Investiture of Professor Griffith will formally grant him the authority and symbols of high office.

June 14, 2017, was the one-year anniversary of Professor Griffith’s selection as the University’s Vice-Chancellor and Principal.

This historic ceremony, the first of its kind for a Vice-Chancellor at the University of Guyana, will involve a procession with faculty attired in academic regalia and the conferring of the official powers and responsibilities of the office to Professor Griffith by the Chancellor of UG Professor Nigel Harris. 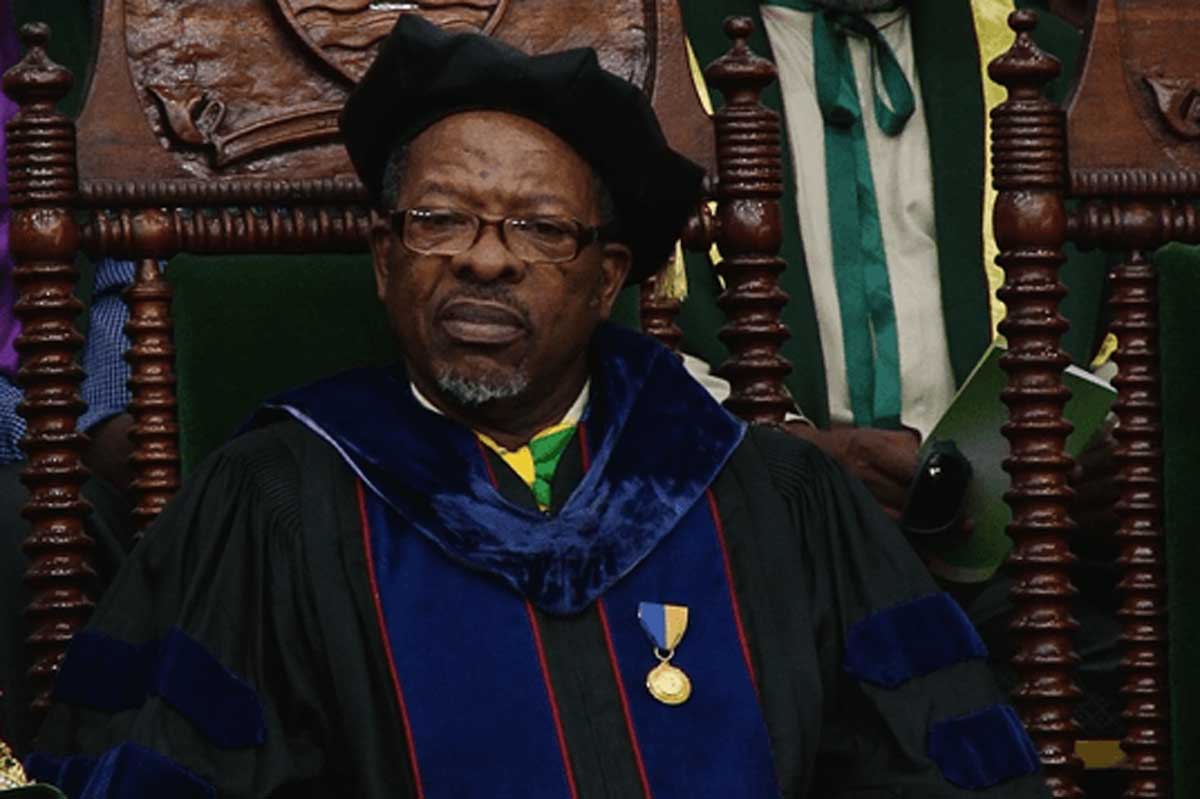 Professor Ivelaw Lloyd Griffith was officially installed as the tenth Vice-Chancellor of University of Guyana.

The Investiture of Professor Griffith will formally grant him the authority and symbols of high office.

June 14, 2017, was the one-year anniversary of Professor Griffith’s selection as the University’s Vice-Chancellor and Principal.

This historic ceremony, the first of its kind for a Vice-Chancellor at the University of Guyana, will involve a procession with faculty attired in academic regalia and the conferring of the official powers and responsibilities of the office to Professor Griffith by the Chancellor of UG Professor Nigel Harris.

Professor Griffith had explained that the officially swearing ceremony takes place one year after the Vice Chancellor’s appointment to allow him an opportunity to prove that he is capable of performing in that capacity.

Professor Griffith had expressed confidence that he has achieved a lot within his one year tenure.

Professor Ivelaw Lloyd Griffith was appointed the Tenth Principal and Vice Chancellor of The University of Guyana in June 2016, having served earlier as Executive-in-Residence at The University at Albany, State University of New York, and the Ninth President of Fort Valley State University in Georgia, where he led the right-sizing of the educational and economic enterprise, focusing on growing enrollment, enhancing the academic profile, controlling spending, launching Honors and Undergraduate Research programs, and initiating a feasibility study to establish a School of Entrepreneurship and Business Innovation.

A tenured professor of political science, he served from 2007 to 2013 provost and senior vice president at York College in New York where notable achievements included growing the full-time faculty by 30 percent, re-organizing Academic Affairs into Schools of Business and Information Systems, Arts & Sciences, and Health Sciences and Professional Programs, and enhancing research and scholarship by creating the Provost Lectures, the Distinguished Scholars Lectures, and the Undergraduate Research Program. He also established Discovery to celebrate and incentivize faculty excellence in research and service. Earlier, he was provost at Radford University in Virginia, budget dean of the College of Arts and Sciences at Florida International University (FIU), and dean of The Honors College at FIU, all while holding his professorship.

A UG alumnus, he was the first person to graduate with distinction in political science. He also holds a Master of Arts from Long Island University, New York, and both a Master of Philosophy and a Ph.D. in Political Science from The City University of New York Graduate School. As well, he graduated from the Harvard Graduate School of Education’s program in educational leadership. An expert on Caribbean and hemispheric security, drugs and crime, he originated the concept called Geonarcotics in the early 1990s as a way to study the complex relationship involving drugs, geography, power and politics, outlining it first in Canada’s leading international affairs scholarly magazine: “From Cold War Geopolitics to Post-Cold War Geonarcotics,” International Journal Vol. 49 (Winter) 1993-94, 1-36.

Just after 5 pm yesterday, Professor Ivelaw Griffith took his seat as the Tenth Vice-Chancellor (VC) of the University of Guyana (UG) to the tune of trumpet fanfare.

He had just been installed in the position for a second year by Chancellor Nigel Harris as part of an investiture ceremony held in the recently renovated George Walcott Theatre. First installed in June 2016, Griffith’s first year was marked by big ideas, big investments and colourful ceremonies, although he has been accused of being preoccupied with grandeur.

President of the UG Students’ Society Ron Glasgow told those gathered that for the students the year with Griffith has been like eating a creole fish dish – sweet, but filled with pesky bones.

He stated that like most Guyanese, UG students like fish and have enjoyed the new lecture theatre, better Wi-Fi across campus and more comfortable ways of paying tuition.

The increase in tuition, however, was one of those pesky bones with which they have found it difficult to contend.

Glasgow congratulated Griffith on the actions, ambitions and visions of both him and his staff, which have improved the learning experience, but took time to encourage the strengthening of transparency and communication.

Dean of the Faculty of Health Sciences Dr Emmanuel Cummings credited Griffith with healing several wounds which proliferated across the university. “We have a much healthier university,” he told those gathered.

Minister of Education Nicolette Henry congratulated Griffith, saying that the government and people of Guyana look forward to his continued contribution to the creation of an innovative education system.

“In the past year, you have brought a drive towards innovation at a time when the university was in danger of stagnation. You have contributed to a sense of augustness and appropriate academic decorum at time when it was increasingly being seen as a place undeserving of respect,” she stated.

Bolstered by this encouragement, the VC committed to the continued implementation of Project Renaissance as a means to bolster the university’s diminished resources, esteem and perspicacity.

“For the University of Guyana to have tomorrows beyond crisis management and beyond avoidance of being practitioners of the science of muddling through, the renaissance bridge-building must be sustained at least for the next three years,” he told those gathered, noting that it was a continuation of the dreaming and doing which saw the university established five decades ago.

Project Renaissance aims to rebuild UG’s educational and economic enterprise and enable it to become a consequential national and international stakeholder.

Throughout its first year, the project has seen several changes being instituted to the organizational structure and operations of UG. Operating under the four pillars of Capital Investment, Academic Enhancement, Economic Viability and Alumni Engagement, this project has birthed the School of Entrepreneurship and Business Innovation, the Turkeyen and Tain Talks, two undergraduate research conferences and the just concluded diaspora engagement conference, among other things.

According to Griffith, the next year will see even more innovation with the establishment of the Renaissance STEAM task force which will be chaired by Drs Norman Monroe and Suresh Narine.

This team will be examining the university’s implementation of its Science, Technology, Engineering, Art and Math programmes. Also on this year’s agenda is a review of the university’s law program.

This project also has an identified chair in the person of Professor Velma Newton, Regional Project Director of the IMPACT Justice Programme. 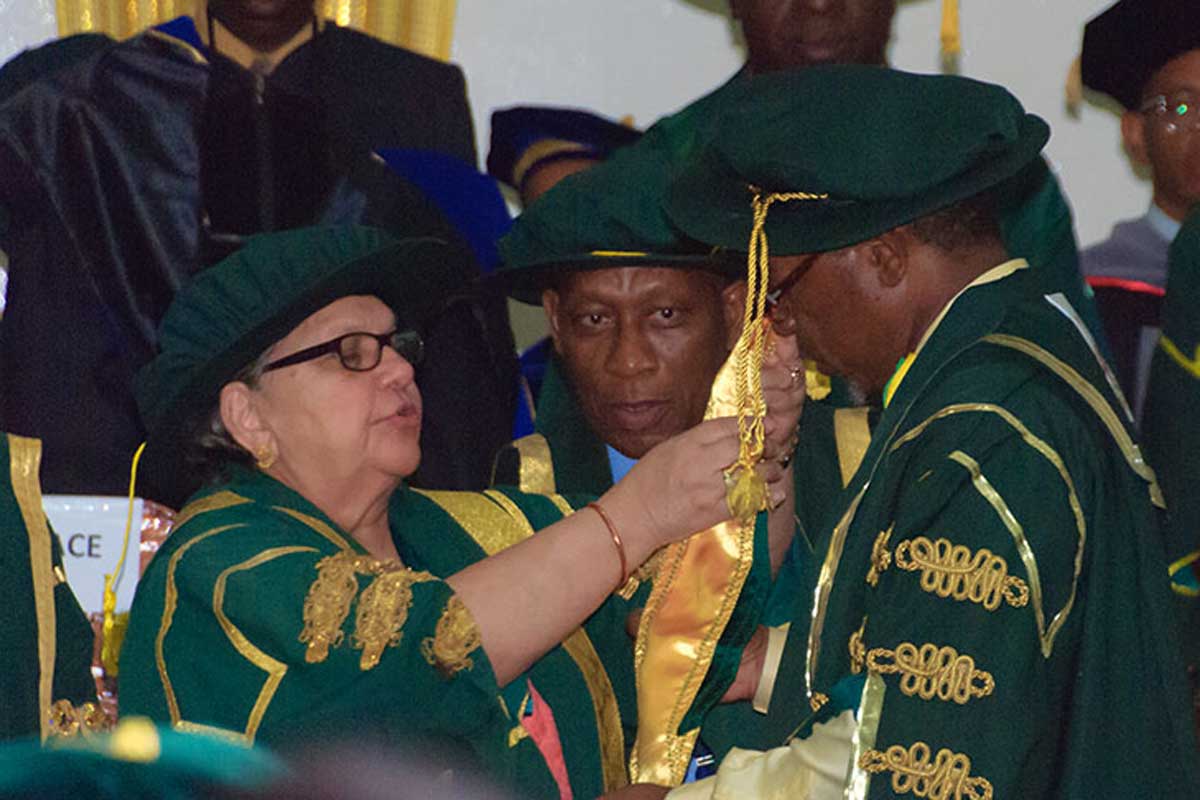 Before an audience of about 300, Professor Ivelaw Griffith in the George Walcott Lecture Theatre was yesterday officially installed as the 10th Vice Chancellor of the University of Guyana [UG] at an investiture ceremony.
Ahead of the ceremonial installation, which was executed by Chancellor Professor Nigel E. Harris, tributes from various academic and professional factions were presented.

The greetings were all flattering and amplified, among others things, that Professor Griffith was best suited to effect an already in progress paradigm shift at the university which boasts a 8,645 student-population across two campuses – Turkeyen and Tain.

The Vice Chancellor was yesterday even credited with healing wounds, some self inflicted, at the national university. It was emphasised by Chancellor Harris before the ceremonial installation that when Professor Griffith accepted the appointment as Vice Chancellor in June 2016, it was an immense sacrifice he made. But there have been criticisms, he observed. Chancellor Harris said that while he believes in criticism, they should however, at all times, be constructive.

The ceremony commenced with a procession with faculty heads attired in academic regalia. It was after a musical rendition by Mr. Keith Waithe, a visiting distinguished artist, that Professor Nigel Harris administered the oath of office and installed Professor Griffith.

The historic moment was followed by a bout of drum rolls and trumpet sounds that emanated from the Police Force Band.
The ceremony advanced with Professor Griffith, who entered garbed in his doctoral robe, being asked to disrobe after which he was helped into the Vice Chancellors’ ceremonial attire.

In his inaugural address as the first installed Vice Chancellor of the university, Professor Griffith acknowledged that although his charge is to lead the university forward he is fully aware that it did not “magically” arrive at the place it is currently at.

“There was dreaming and there was doing,” said Professor Griffith who recalled visionaries the likes of the late Presidents, Cheddi Berrett Jagan and Linden Forbes Sampson Burnham and C. V. Nunes, a former Minister of Education.

But it has not always been smooth sailing from the inception of the university, Professor Griffith noted even as he shared his intent to build on the work that was started a long time ago.

Among those who witnessed the auspicious occasion yesterday were President David Granger; Prime Minister Moses Nagamootoo; Government ministers and other dignitaries.

Professor Griffith was appointed the 10th Principal and Vice Chancellor of UG in June 2016.

He had earlier served as Executive-in-Residence at The University at Albany, State University of New York, and the Ninth President of Fort Valley State University in Georgia, where he led the right-sizing of the educational and economic enterprise, focusing on growing enrollment, enhancing the academic profile, controlling spending, launching Honors and Undergraduate Research programmes, and initiating a feasibility study to establish a School of Entrepreneurship and Business Innovation.

Professor Griffith has also introduced a number of similar programmes since taking up his appointment and, according to him, he has plans to do even more as the renaissance of UG continues to unfold.