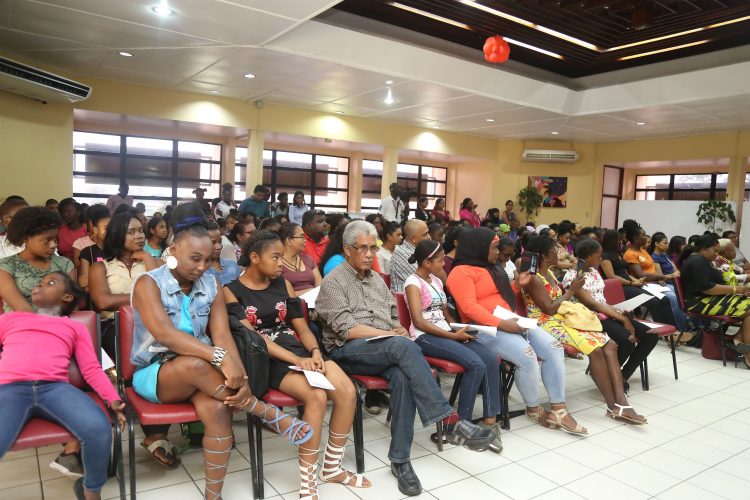 Over 40 young girls will over the next 12 weekends undergo training in coding as part of an initiative to encourage and nurture their participation in the Information and Communications Technology (ICT) field.

The opening session of the Guyanese Girls Code programme, which is an initiative of the Ministry of Public Telecommunications in collaboration with the National Centre for Educational Resource Development (NCERD) and the University of Guyana (UG), was held yesterday at the Education Lecture Theatre at the Turkeyen Campus.

The programme is designed to teach Beginners Coding/Programming to Guyanese girls between the ages of 11 and 14. The goal of the initiative is to address the gender disparity in the Guyana’s ICT sector, where women and girls remain underrepresented.

“You are the chosen generation. You guys are going to transform Guyana with how you use and promote ICT”, Minister of Public Telecommunications Catherine Hughes told the participants during the welcome remarks.

Hughes said at last opportunities can be given to girls to ensure that they can fully participate in the important field. “So, today is really the start of a whole new journey that you girls will undertake, hopefully starting today, the experience will go with you through the rest of your lives,” Hughes said.

Hughes noted that this is important since usually when situations arise involving the use of computers and ICT, there is little or no involvement of girls, and “…we want to make sure that the girls are equally there.”

“Normally, we are faced with the question: where are the girls?” Hughes observed, while relating that sometimes in a room fill with about sixty people who are all computer graphic specialists or programmers or website developers or animation developers, there are only two girls.

She stated that in developed countries across the world, women can be seen operating at the “higher levels” and this should also be visible in Guyana.

“The great thing is more girls are doing well at high school, more girls are going into university, so we girls have got the capacity to do it,” Hughes continued.

She said that her ministry always believed that they had to make a change and “…that we had to train more of our Guyanese women to get into Information Technology. ICT is not only meant for boys and girls. Women are exceeding, exceling and they are leading in many ways.”

“There are so many facets of being a part of this ICT thing, not just the laptops, tablet, phones, all of that is part of the ICT agenda, so you have nothing to be bored about,” Hughes related while telling the young girls, “you have a wonderful opportunity, take advantage of it”.

Meanwhile, Penelope DeFreitas, Head of UG’s Computer Science Department and Lead Instructor of the Guyanese Girls Code Programme, said that the number of participants is overwhelming since only about 20 girls were catered for during a discussion of the plans for the project.

The curriculum will cover both theoretical and practical aspects, DeFreitas said. The theory, she noted, will be about 40 percent of the course and covers a range of topics, including the pioneers in computer science, practical applications of software and hardware in the real world, security and the responsibility when it comes to using technology, while the practical aspect will encompass a number of activities. 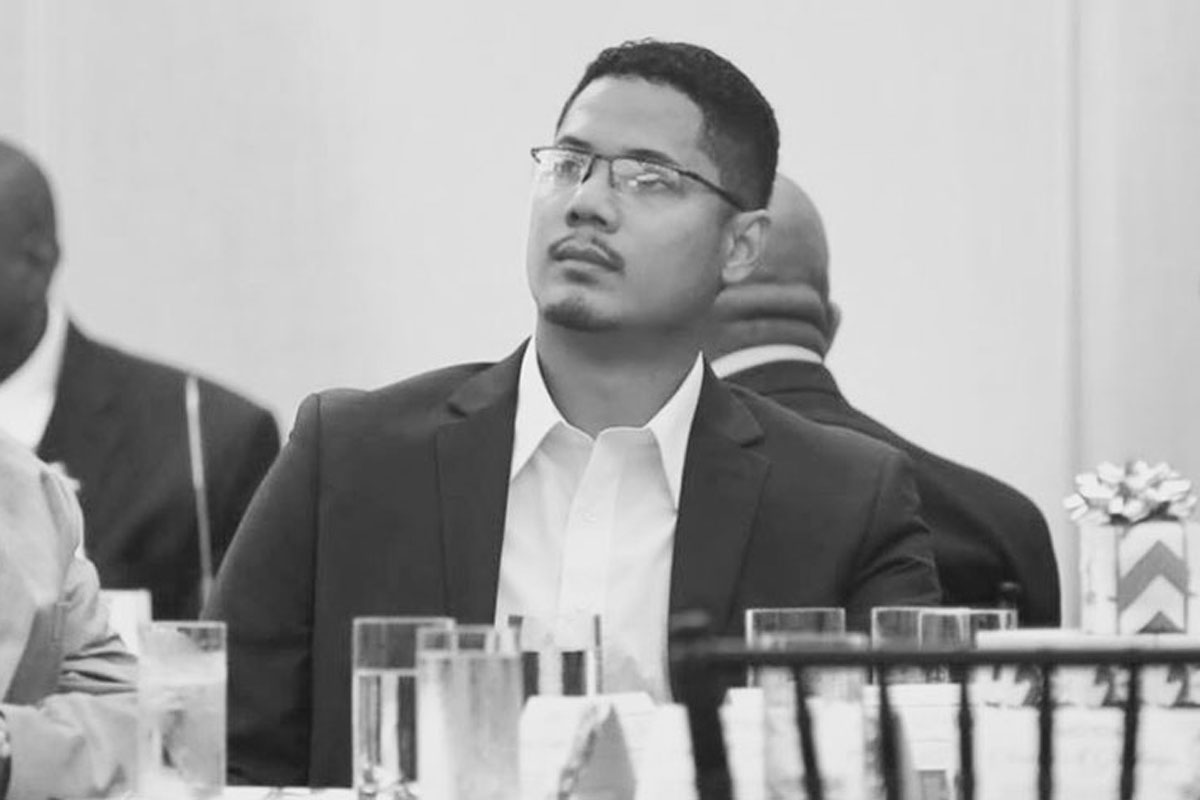 Empowering others through ICT – Eldon Marks is living his dream

“LIVE YOUR dream. Be as crazy as you possibly can be, ignore the status quo, set your goals and go after them with blind determination,” Social Entrepreneur, Eldon Marks said as he addressed a room full of entrepreneurs and software developers in a collaborative work space he had developed with his business partner, Chitra Dwarka.

Marks, who ever so often describes himself as a dreamer, is no stranger to Guyana, having won the Ministry of Public Telecommunication’s first Hackathon along with his team from Version75 Solutions (V75) in November, 2016. But long before he had risen to stardom, Marks had been quietly working behind the scenes, molding the nation’s youths to be the best version of themselves.

“I owe much of academic and professional development to the University of Guyana, more specifically to my former lecturers in the Department of Computer Science who later became my colleagues and mentors. The environment that I was afforded as a student and subsequently as a young lecturer gave me the opportunity to discover my true potential and reach further than I had ever conceived.”

Although being exposed to what many describe as the “world of opportunities,” Marks opted to return home to contribute to the development of his country in the fields of Information and Communication Technologies (ICTs) and Entrepreneurship.

“Looking out from a developing economy, it is easy to see what we don’t have and it is easy to be consumed with studying our problems instead of solving them. ICT Entrepreneurs are much needed in Guyana for two reasons: (1) it is widely accepted that digital industries where an individual can electronically provide services and products regardless of geographic location are significant drivers for economic growth – simply put, a trained web designer with a laptop and Internet access can quickly and readily earn a decent living, even in Guyana. (2) The entrepreneur mindset is concerned with assessing problems to quickly and effectively solve them – taking action over talking about it.”

Further, driven by his personal philosophy drawn from spiritual teachings and his innate desire to empower others while empowering himself, the husband and father of one made one of his many dreams a reality developing his own company – Version75 Solutions.

As a ‘dreamer,’ he told the budding entrepreneurs and software developers that there were risks that he had to take but it was important for his dream to materialize.

A dreamer, on the other hand he explains, pushes beyond the limits set by society. “So being a dreamer really means constantly challenging those social norms, the status quo, pushing the limits and eventually discovering what more we can actually do and how much more we can deliver,” he explained.

For him there is no harm in taking risks. “There is really no harm in taking that risk of setting an objective, however, crazy it might be. You set the objective as high as possible and whether you achieve it or not, you learn from it. Be as crazy as you possibly can be, ignore the status quo, set your goals and go after it with blind determination,” he posited.
Though there will be challenges, there are meant to be overcome, Social Entrepreneur emphasized.

Here in Guyana, Marks and his team at V75 were faced with the sad reality that acquiring local support from businesses in the field of ICT was a difficult one. But instead of ‘packing up shop’ and opting to do something else, they decided to target foreign markets. “Locally we are faced with this stigma with respect to our own local developers…. We have this diminished image of our own skills as Guyanese,” he explained. Its first client was a Canadian company.

“Through networking, we were fortunate enough to secure an offshore client – a Canadian Insurance Company,” he added. Today, 64 per cent of its projects are for clients outside of Guyana.

There was another challenge V75 had faced during its initial phase – the team had difficulties finding a common work space. It was out of that challenge that WeOwn Space was established approximately seven months ago.
The collaborative work space, situated at Lot 3 David Rose Street and Aubrey Barker Road, South Ruimveldt Gardens, Georgetown, in the words of Marks, “gives local startups a fighting chance,” on a daily basis. It was further explained that WeOwn Space provides a unique environment for co-working, leaning, collaborating and networking to support Guyanese on their professional journey.

Though Marks is the founder of V75 and the Co-founder of WeOwn Space, he said for both entities there is no boss, noting that the input of all team members is important and valued deeply.
Outside of the world of ICT, Marks said he is a husband and father one. He said while pursuing one’s dreams is important, family is important too.

“It is no easy task to be a full-time professional and have a family. The constant context switching and collection of responsibilities can often force you to choose one or the other. In my case, my family is the reason that I became a social entrepreneur who lives up to delivering value. I can better provide for them today while leaving behind a slightly better world, tomorrow.”