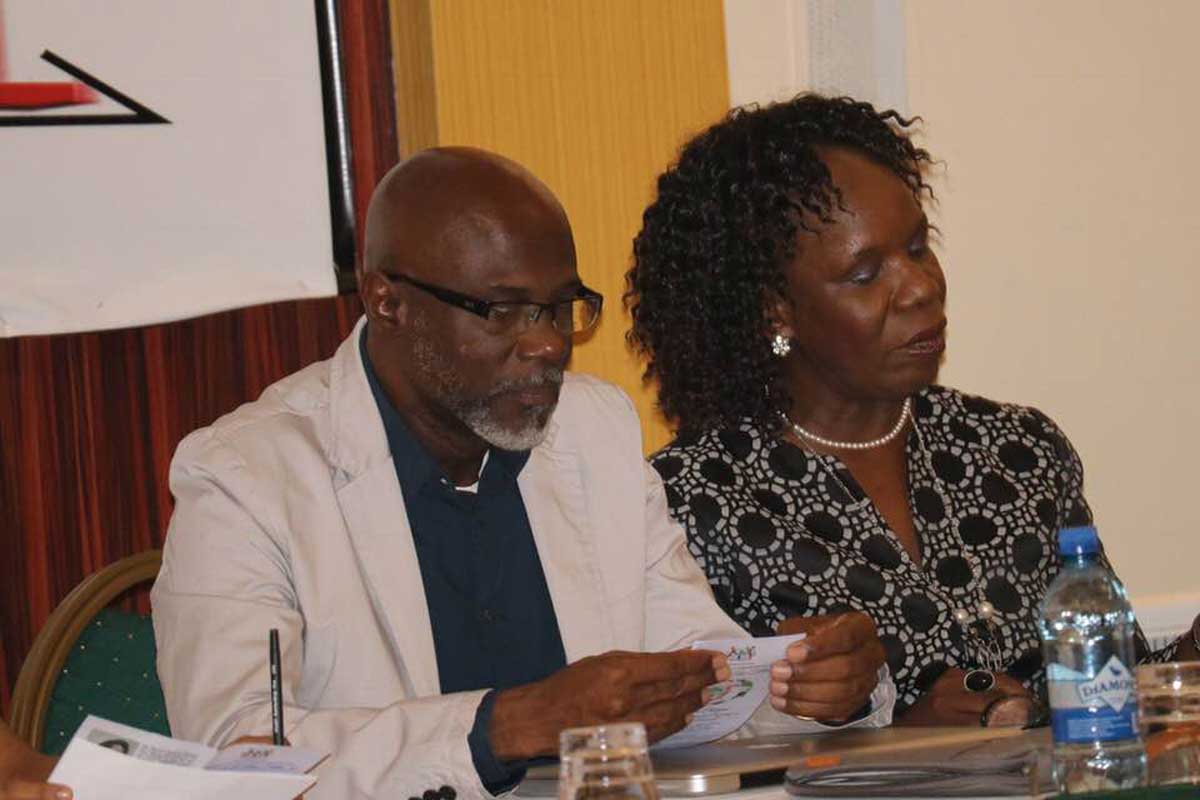 Presidential Adviser on the Environment, Rear Admiral Gary Best, sharing his take on climate change with the audience at the Pegasus Hotel on Thursday

WHILE climate change may be regarded the world over as one of the biggest crises facing humanity, most Caribbean leaders seemingly beg to differ.
The was starkly brought to the fore Thursday evening by Dean of the Faculty of Earth and Environmental Sciences at the University of Guyana (UG), Dr. Paulette Bynoe.
“Within the Caribbean, we have a culture of wait-and-see when it comes to environmental management…

“We are reactive, and in most cases when we react, it is too late,” she said. “A risk-based approach is needed in order to mitigate or adapt to the effects of climate change,” she told participants gathered at the Pegasus Hotel to ponder upon the subject: ‘The Guyana imperative for prospering in a climate-altered world’. As defined by the United Nations Framework Convention on Climate Change (UNFCCC), climate change is a change of climate that is attributed directly or indirectly to human activity, altering the composition of the global atmosphere.

Due to climate change, the world is faced with global warming, which is the increase in the overall temperature of the earth’s atmosphere generally attributed to the greenhouse effect caused by increased levels of carbon dioxide, chlorofluorocarbons (CFCs), and other pollutants.

That and other adverse effects of climate change are being felt by almost every country, including those in the Caribbean, but according to Dr. Bynoe, in spite off all the evidence before them, some regional leaders are still taking a reactionary approach to dealing with the matter.

Countries such as Dominica and the British Virgin Islands, she said, are still reeling from the effects of Hurricanes Irma and Maria, which tore through parts of the Caribbean in August and September, leaving scores dead and infrastructure destroyed beyond repair.
And while some are still in doubt as to whether the intensity of Hurricanes Maria and Irma had to do with climate change, the experts know better.

The intensity of both hurricanes had seemingly taken the countries by surprise, since most Caribbean leaders were reportedly not expecting them to be so severe.
Most speakers present at the discussion shared their views on climate change, but maintained their focus on the subject at hand.

She made reference to several assessments and agreements which the government can use as a guideline when patterning policies.

One agreement in particular that was touted by most of the speakers was the Paris Agreement (Accord de Paris), Paris climate accord or Paris climate agreement, which Guyana is a part of.
It is an agreement within the UNFCCC dealing with greenhouse gas emissions mitigation, adaptation and finance, starting in the year 2020.

The language of the agreement was negotiated by representatives of 196 parties at the 21st Conference of the Parties of the UNFCCC in Paris and adopted by consensus on 12 December 2015. As of November 2017, 195 UNFCCC members have reportedly signed the agreement, and 170 have become party to it. Bynoe said the Agreement aims to respond to the global climate change threat by keeping the global temperature rise this century well below 2 degrees Celsius above pre-industrial (1840s) levels, and to pursue efforts to limit the temperature increase even further to 1.5 degrees Celsius.

Students of UG and persons who were present at the discussion questioned how Global Warming can be mitigated, if most of the economies are driven by fossil fuel and have increasing populations.
The Intergovernmental Panel on Climate Change (IPCC) Fifth Assessment Report had highlighted that because of the aforementioned factors there has been an increase in the surface temperature and it is expected to get far worse.

“Heat waves will occur more often, there will be extreme precipitation events and the ocean will warm and acidify, added to the rise in global sea levels,” said Bynoe. She believes that if Guyana is going to respond to those changes then there must be economic empowerment through financial flows since the developed countries have held back on their promise to financially support lesser developed countries in the area of climate adaptation.

Since Guyana is expected to be an exporter of petroleum after 2020, Presidential Adviser on the Environment, Rear Admiral Gary Best believes that the earnings from that new industry should fund Guyana’s transition to a green economy. Guyana’s contribution to reducing climate change impacts, according to his interpretation, would require public finance flows for the adaptation of climate change and private finance for mitigation.

He added that overall mainstreaming of adaptation and mitigation measures into the national budget seem to be a matter of course. The adverse effects of climate change have been evident in Guyana since 2005 when almost the entire country was flooded due to heavy rainfall. According to Vice-Chancellor, Dr Ivelaw Griffith, the damages incurred during that period cost the country some US$450M, which is almost 60 per cent of the country’s Gross Domestic Product (GDP).

Since then, the Government of Guyana was able to recognise the issue and implemented the Low-Carbon Development Strategy (LCDS) through which Guyana benefited from a US$200M agreement with Norway to preserve the rainforest, and by extension mitigate the effects of climate change.

On the other hand, access to funds for adaptation has been a challenge since the international adaptation fund was overridden by the Green Climate Fund which was established within the framework of the UNFCCC to assist developing countries in adaptation and mitigation practices to counter climate change, he said.

Although the UNFCCC had declared that Guyana bared no responsibility for climate change it is still an issue which affects the global population, so Best urged persons to help the Government work towards the realisation of a Green Economy.