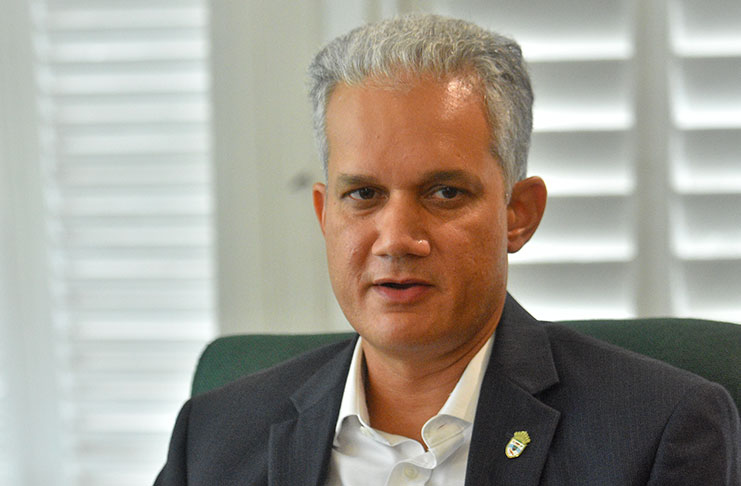 “What we can do is look at what are the international norms. Royalty, when you look around, is more between ten and twenty percent, not two percent,” Dr. Mangal told a discussion  on the Government of Guyana’s Vision for the Oil and Gas Sector held at the University of Guyana’s Education Lecture Theatre.

He also noted that the tax is usually between 20 percent and 30 percent or more. Mangal remarked that the 50-50 percent profit share is “not bad”. However, the zero tax and two percent royalty that is in Guyana’s agreement has not gone down well with the advisor.

Asked whether the contract should be renegotiated, he said that was a question for Guyana to answer but he for the time being would withhold his view. “I am not at a stage yet where I am sharing that view publicly but it is under discussion,” he said. With “a lot of suspicion” still around about the oil sector, he said civil society and the wider Guyanese community need to develop greater trust of government and their representatives.

On the issue of whether the contract should not only be reviewed but also amended, the Petroleum expert said both contracting parties need to be comfortable. “if one party becomes really uncomfortable, it will change. Guyana is a sovereign country,” he said. At the same time he said policymakers would have to examine the trade-offs and be careful about scaring away investors. “Guyana has to be careful because that could be the perception, will be the perception but I don’t think it’s black and white. We have to be careful not to simplify too much and it’s not black and white and there could be a role for the grey area in the middle,” he said.

Mangal said he was pushing for experts from the Inter-American Development Bank and the International Monetary Fund and other agencies to conduct a “thorough a review of the contract” and for government to decide what it would do with the results.

While Minister of Natural Resources, Raphael Trotman continues to stress the benefits in the 2017 agreement with  ExxonMobil when one considers the political, enormous financial and security risks facing that company, Mangal said Guyanese would be happier if there was transparency about the negotiating system. “The way I would be happy and you would probably be happy as well is if a process was followed  and you knew who was involved and we knew their competencies and their expertise and they were respected did they go out there and bat for Guyana and they did they best they could but I think a lot of people in Guyana are questioning that,” he said.

Mangal noted that Guyana’s oil reserves discovered so far are of a very high quality and requires less processing. “I know it’s light oil which means it’s good oil and that’s a huge factor,” he said.

The Presidential Advisor, whose latest short-term contract ends in March 2018, said generally oil companies are “very powerful and experts in everything they do and they know how to influence governments to a ‘T'” but they could buckle under intense public pressure. “However, they can’t influence people. The only thing they are scared of is people so that’s why it’s important for Guyanese to have intelligent debate,” he said. At the same time, he cautioned against scaring away investors. After pushing for the ExxonMobil contract to be released, he welcomed the “brilliant analysis” that is leading to questions being asked.

The Presidential Advisor expressed grave concern about the fact that, based on the 1999 agreement and the new 2017 deal, ExxonMobil is controlling the entire Stabroek Block of about 600 blocks or 10 times more than what Guyana’s laws allow. “It is not good for one company owning too much of your acreage. Exxon already owns over fifty percent of the acreage in Guyana. That’s not good for Guyana,” he said.

Mangal argued that countries should benefit from diversity and competition in its acreage from companies from several parts of the world such as Europe and South America. “Oil is high-stakes, governments, companies they will do things at a high level,” he said. He recommended that Guyana examines how the acreage is allocated for the long term.

The Presidential Advisor warned against Guyana neglecting its agricultural sector, and instead recommended that a lot of the oil revenues be ploughed into that sector as well as developing physical infrastructure and the social sectors.