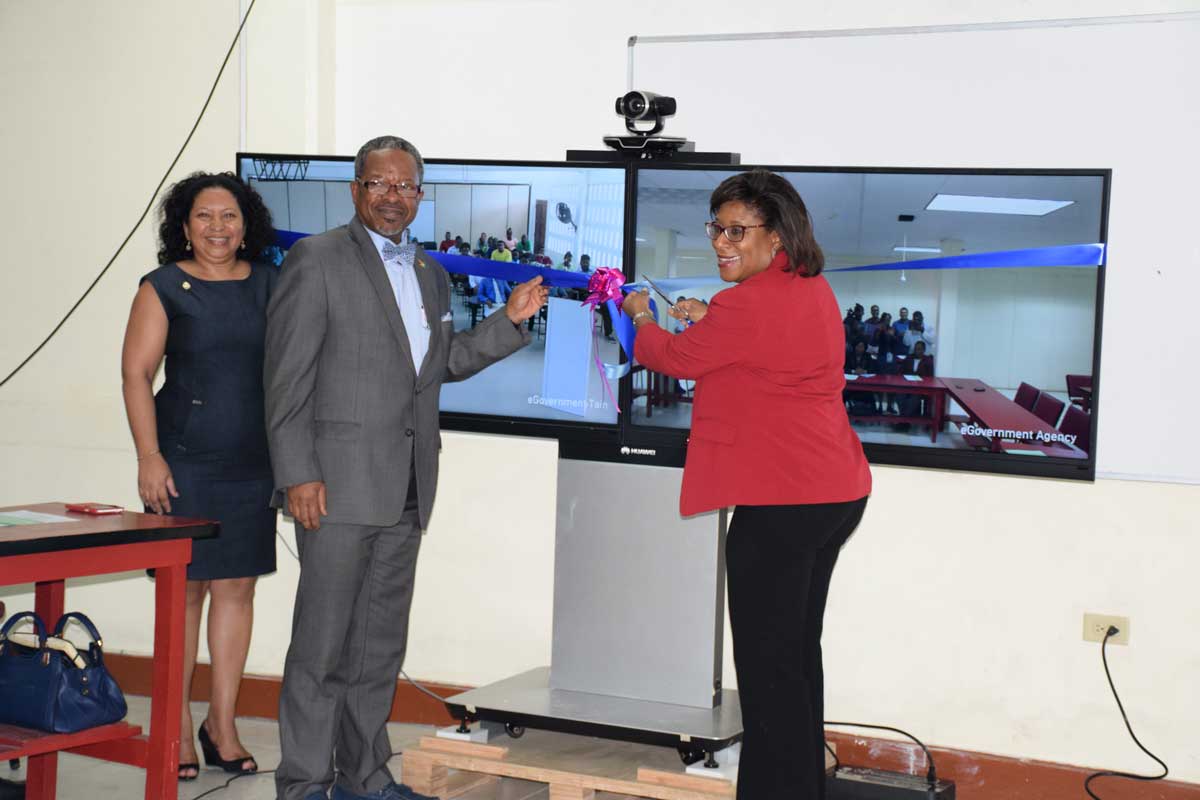 University of Guyana Tain and Turkeyen’s students will now be able to access local and international classes from their respective locations. This was revealed today when the University of Guyana officially launched its Teleconferencing Platform at the Centre for Information Technology (CIT), Turkeyen Campus.

The commissioning featured a live demonstration of the Teleconferencing Suite’s capabilities with the participation of students on the Berbice Tain campus. It was explained that prospective students especially from Region Six, East Berbice Corentyne will now be able to access courses that are unavailable at the Tain campus but are at the Turkeyen campus without leaving their classrooms.

Minister of Public Telecommunications, Catherine Hughes said that the agreement between the Ministry and University is to ensure that there is more connectivity on the campuses and also to enhance education countrywide.

She explained that with the use of technology, distant locations are able to connect which makes it easier for students, teachers and lecturers. “This teleconferencing suite is one more step in the march of creating a higher level of digital connectivity for all citizens of Guyana”, Minister Hughes emphasised. She noted that there “is no time to pause” when the government moving to make Guyana a digital country.

Minister Hughes said that her Ministry recognised that technology around the world is changing rapidly and even though Guyana is behind, the prospect of “catching up” is exciting.” She expressed gratitude to Huawei Technologies, the University of Guyana, and E- Government Agency for “their tireless efforts in making the Teleconferencing Platform a reality.”

The Vice Chancellor added that it is the memorandum of understanding  which will enable the presence of the University in a number of locations. He also expressed gratitude to the relevant agencies for their co-operation in bringing the initiative to light.

The teleconferencing suite is a 2013 gift from Huawei Technologies which was installed on the University’s Turkeyen Campus recently as part of the agreement for Technical Cooperation between the University and the National Data Management Authority (NDMA) of the Ministry of Public Telecommunications.

The NDMA first had to reconfigure the suite to the new fibre optic network connectivity requirements on campus before the teleconferencing was made possible.

In April, 2017 Minister of Public Telecommunications Catherine Hughes and University of Guyana’s (UG), Principal and Vice Chancellor Professor Dr. Ivelaw Griffith signed a Memorandum of Understanding (MOU) to boost the Information Communication Technology (ICT) platforms at the Turkeyen campus, in keeping with one of the major goals of the Ministry of Public Telecommunications to better equip UG to provide broad band internet access to students and lecturers.