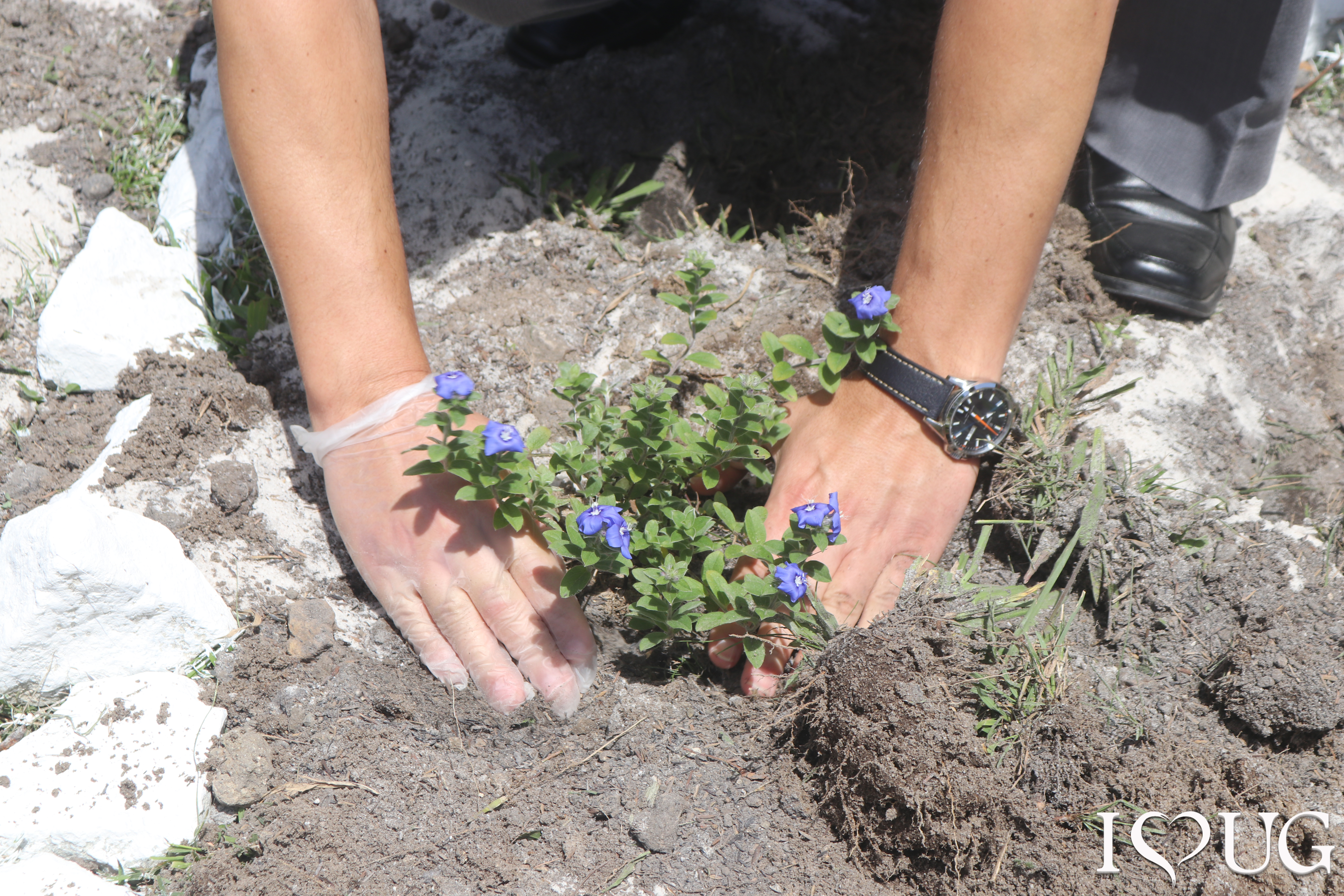 (UG-DECC/Georgetown/Guyana/April 3, 2021 – UG-UN Create Peace Garden). The chorus of the well-loved national Song “Song for Guyana‟s Children” contains these poignant words “Onward, upward, may we ever go. Day by day in strength and beauty grow, Till at length we each of us may show, what Guyana‟s sons and daughters can be”. They are also now given life in the Peace Garden started last Thursday in a beautiful and simple event at the University of Guyana‟s Turkeyen Campus.

It brought the formal curtains down on the week-long activities to mark International Day Against Racism and Discrimination. The University of Guyana collaborated with the United
Nations for the week on Commemorative events. The Peace Garden transforms a space on Campus into a garden with benches, paintings, wind mobiles and flowering plants all depicting or associated with peace, love and respect. The garden was literally planted by a mix of persons in the United Nations and international system here in Guyana. These included Mikiko Tanaka, Head of the United Nations in Guyana and representatives from UNICEF, UNDP, UNHR, UNWFP. Ambassadors from several foreign missions based in Guyana also joined and planted their tokens of international friendship, respect and goodwill. Those participating were the British High Commissioner, the Canadian High Commissioner and Deputy Chief of Mission, The Indian High Commissioner, The European Union in Guyana and The Confucius Institute of China. The basic design and structure of the garden was done by Staff of Office of Philanthropy, Alumni and Civic Engagement (PACE) led by Ms. Christine Chowagir, UG‟s Architecture and Art Departments led by Dr Anna Perreira and Mr. Winslow Craig and Michael Khan, along with the Faculties and Grounds Departments led by Mr. Bjorn Williams. Botany design was led by Lecturer in the Faculty of Natural Sciences Kimberly Craig. Mural paintings and installation art were done by Nelsonia Budram Persaud, Director of the Centre for
Communication Studies and popular mural artists Ransford Simon and Nigel Butler. At the launch of the event, the officials participated by hanging wind chimes, painting rocks and placing flowering and non-flowering plants at the site to bring alive the Peace Garden, which is situated between the University‟s Library and the Vice Chancellery. In her brief remarks during the launch of the event, Vice-Chancellor Xi, Prof. Paloma Mohamed Martin said the initiative could be the first of many more to come throughout the University‟s campuses across the country to promote peace, respect for persons and the environment amongst all citizens. The Vice-Chancellor used the opportunity to encourage everyone to continue to spread positivity, love and respect. “The symbolic creation of the Peace Garden serves as a testament of what can be done when people work together in peace, love, respect and harmony,” she noted.
Because of the Covid 19 restrictions still in effect, only a small number of person‟s were able to attend the face-to-face event. The University expects to invite several other groups to place their plants and make their mark in small batches over the course of the next few months. Resident Representative of the UN System in Guyana who also gave brief remarks applauded the initiative of the University and all the departments which worked together at short notice to restore and create the space. She noted; “The International Day for the Elimination of Racial Discrimination is observed annually on the day the police in Sharpeville, South Africa, opened fire and killed 69 people at a peaceful demonstration against apartheid "pass laws" in 1960. In 1979, the UN General Assembly adopted a programme of activities to be undertaken during the second half of the Decade for Action to Combat Racism and Racial Discrimination. On that occa-
sion, the General Assembly decided that a week of solidarity with the peoples struggling against racism and racial discrimination, beginning on 21 March, would be organized annually in all
States.
Since then, the apartheid system in South Africa has been dismantled. Racist laws and practices have been abolished in many countries, which the United Nations have built an international framework for fighting racism, guided by the International Convention on the Elimination of Ra-cial Discrimination. The Convention is now nearing universal ratification, yet still, in all regions, too many individuals, communities and societies suffer from the injustice and stigma that racism
brings. PACE, the Department of Maintenance and Grounds, Faculty of Education and Humanities, spe-cifically the Art Department, came in for high praises for adding ceramics and paintings done by students to the collection in the Peace Garden guided by renowned Guyanese sculptor and award-ee of the „The Anthony N. Sabga Caribbean Awards for Excellence‟, Winslow Craig, A.A. Textile sculptures done by student also flanked the walls of the Vice Chancellery adding to the beautification spearheaded by Guyanese International Storyteller and Artist, Michael Khan aka Ole‟ Man Pappie.
Dean of the Faculty of Education and Humanities, Dr. Roslin Khan applauded the efforts of the University and the level of creativity that was put into the Peace Garden, noting that the Faculty was honored to participate in the initiative. “The Art Department responded immediately and willingly to the day‟s event providing the work of students to enhance the peaceful environment, which reflected the influence of Guyanese culture through the work of Amerindian, East Indian,
African, Chinese and Portuguese.” The Peace Garden is an initiative led by PACE in the office the Vice-Chancellor of the University of Guyana.

The University of Guyana is the 58th year state University of Guyana. It offers 136 programmes in over 60 disciplines online and face-to-face in 8 campuses across Guyana. With a student population of now 10,000, UG has provided education, learning and research for over 50,000 alumni. The mission of the University is to discover, generate, disseminate and apply knowledge of the highest standard for the service of the community, the nation and of all mankind within an atmosphere of academic freedom that allows for free and critical inquiry. UG’s forward thinking Blueprint 2040 is currently setting the course for the University’s future design and institutional response to the changing needs of
Guyana.