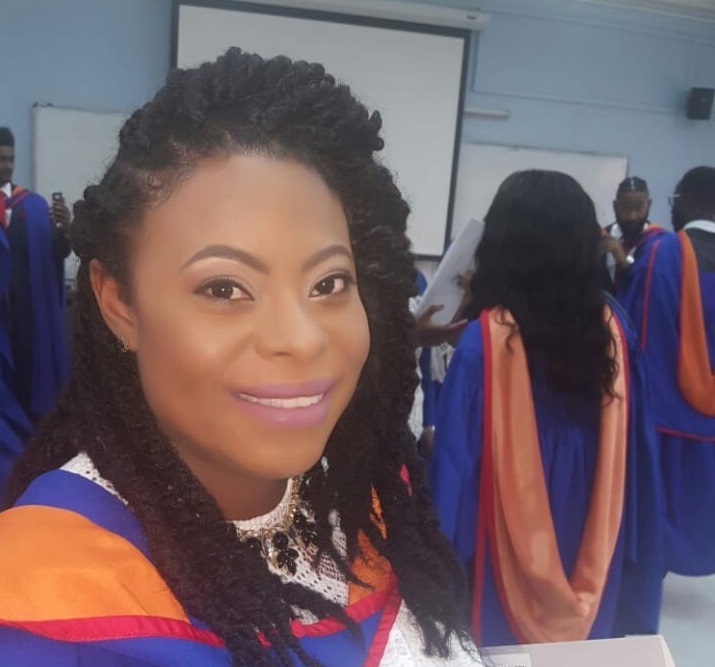 “I go beyond the perception that I cannot do it and I invest 100 percent to become the person I want to be” Ms. Rhonda Hamilton-Weekes, Lecturer, Centre for Communication Studies

Rhonda Hamilton-Weekes is currently a lecturer in the Centre for Communication Studies at The University of Guyana. In June 2018, she expanded her academic portfolio having graduated with a Masters in Instructional Design and Technology from The University of the West Indies, Cave Hill Campus, Barbados.

Her teenage years were spent at Providence Primary School after which she transitioned to Covent Garden Secondary School. One day, University of Guyana personnel visited her school on outreach. She distinctly remembers her interaction with former registrar Mr Vincent Alexander, who gave her an application form to apply to The University of Guyana. “I had never thought about attending university up to that point in my life,” she admitted. However, she kept the application form and years later used that very same form to apply to UG.

Her initial intention was to pursue Spanish at The University of Guyana, but instead she did a diploma in Communication Studies and graduated in 2005. Wanting to be independent and earn, she took a break from studies and decided to work: “I taught at the Institute of Professional Education for approximately one year and thereafter at Berea Royal College.”

After some time, she returned to UG and pursued a degree in Communication Studies, graduating in 2009 with a distinction. “Having completed the degree I wanted to work in Public Relations, that was my area of interest in communication,” said Ms Hamilton-Weekes. “However that did not materialise and I got a job at GraceKennedy instead.”  Shortly after joining GraceKennedy she was offered the opportunity to lecture at UG, and so began teaching the introductory courses as a part-time lecturer. In 2010 she became a fulltime member of staff and currently lectures in Media Management, Online Journalism, Integrated Marketing Communication, Specialised Journalism: Arts and Culture; and a Research Course.

In 2014 she pursued a Postgraduate Diploma in Education (English) at The University of Guyana. And her educational pursuits did not end there: she applied to two other masters programmes but could not pursue them due to lack of funding. However, in December 2015 she started a Masters in Instructional and Design – a partnership between The University of Guyana and The University of the West Indies. Ms Hamilton-Weeks explained how the versatility of the programme and its focus on online learning is applicable to, and can be useful to, all faculties of the university.

Alongside her studies and lecturing, Ms Hamilton-Weekes has continued to expand her portfolio. In 2012 she lent administrative support to the Centre for Communication Studies when she served as acting director. She also provided general support to the Faculty of Social Sciences, where she served on the Health Sciences Board for one year, and also served on the Learning Resource and Facilities Committee. In addition, she did training in Communication: New Media for the Guyana Police Force.

Ms Hamilton-Weekes believes that whatever you do should be done to best of your ability.  She is inspired to dispel the stereotype that women cannot do certain things in academia or elsewhere. “I go beyond the perception that I cannot do it and I invest 100 percent to become the person I want to be,” she said with a smile. In the past, she viewed failure as a disappointment. But today, she turns failure and disappointment into strength.

Her vision for the Centre for Communication Studies is to offer online courses, blended format courses (a combination of face-to-face and online) and specialised courses at both the undergraduate and postgraduate levels. She feels this will make the programme more accessible and encourage more applicants to the programme.

To foster development, she explained, The University of Guyana needs to redesign and repackage its brand to meet market needs, develop a working online programme, and revise the defects in access to online courses. She hopes that more personnel can be trained in Instructional Design and Technology, so that by 2020 an effective, efficient and committed team can be put together to develop online programmes. She also advocates a consistent mentorship programme to guide new lecturers of the university on its policies, operations, procedures etc.

Outside of UG, Ms Hamilton-Weekes is a member of the Herstelling church of the Nazarene and sits on the church advisory board for the Demerara-Essequibo district. She would like to be remembered as someone who gave her all and tried to inspire others to give their best as well.

By the Public Relations Division, University of Guyana

Reprint permission must be requested from the Public Relations Officer, University of Guyana